Why aren’t magnetic nanoparticles living up to their potential in wastewater treatment?

Research into using magnetic nanoparticles in wastewater treatment is incredibly promising. In 2019 almost 3000 papers were published on the topic and the rate of interest in this area is increasing rapidly. 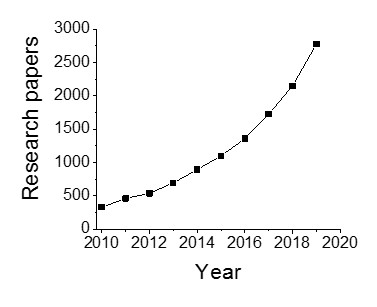 The reason for this interest is that magnetic nanoparticles can adsorb many contaminants found in water. Then, in theory, the particle/contaminant conjugate can rapidly be removed through magnetic separation. The list of contaminants that can be removed from water is broad and includes:

With so much research into the subject over the last decade you would expect at least some of these applications have made it out of the lab and are being commercialized. But this is not the case. In fact, when you talk to people in the wastewater industry what you find is that there is a great amount of interest….but magnetic nanoparticles are not being used. Why is that?

Many researchers see the promise of magnetic nanoparticles for wastewater treatment and want their work to be applied in the real world where it can do some good. But there has been a disconnect between what works in the lab and what works in the field. We are well positioned to see this disconnect as we have developed magnetic nanoparticle-based separation technology and transitioned it from the lab to the field.

Lack of effective magnetic separation technology at scale has been a major problem for magnetic nanoparticle separations beyond the lab. This is due to high cost per throughput of magnetic separators but has also been exacerbated by research that focuses on using small, superparamagnetic particles.

So clearly the choice of particle has a large impact on the speed and thus cost of separation. But just as importantly, using the right distribution of particles (superparamagnetic + ferromagnetic) is crucial to strike a balance between adsorption capacity and magnetic separability. This approach is a departure from what is typically pursued in research which is using the smallest particles with the narrowest possible size distribution.

The other side of successful separation is developing a cost-effective magnetic separator. Often when scientist and engineers encounter this challenge, their first thought is to simply use larger, stronger magnets such as neodymium magnets. However, our own extensive research shows this approach is a dead end, or at least produces a sub-optimal (more expensive) solution. The graph below is a distillation of over 200,000 data points and plots particle clearance time vs magnetic field strength. What is immediately evident is that at field strengths above 2000 G (200 mT) clearance speed improves only marginally with increasing field strength.  Note that rare earth magnets typically have a surface field strength of 6500 G or greater. 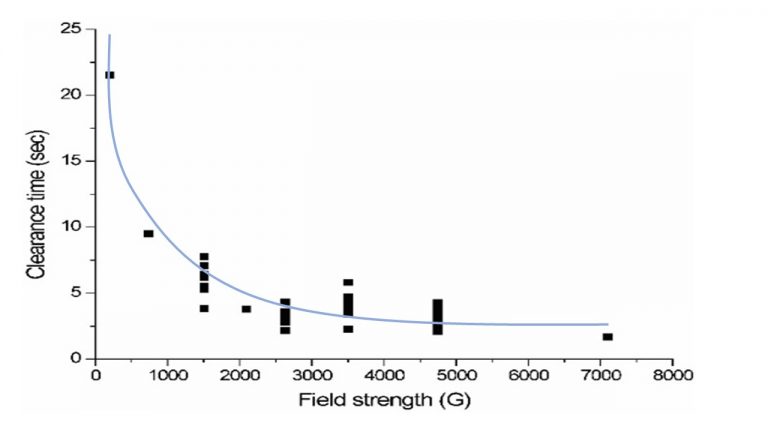 Increasing field strength is not the answer, in fact it exacerbates the problem by making the separator even more expensive than it needs to be since rare earth magnets are far from the most economical option on a cost per field strength basis. They are also not well suited to operating in wet environments due to high rates of corrosion.

The last major barrier is a simple one, price. Coated and particularly monodispersed magnetite nanoparticles have been prohibitively expensive. Even bare magnetite nanoparticles bought in multi-kilogram quantities that are often too expensive. These high prices were frustrating when our company was looking to move our algae harvesting process out of the lab because it was clear that the prices of available particles were too high to be economically viable. This led us to develop and scale our own low cost, high purity production process which allows us to provide these particles for a lower price than anyone else in the market. This lower price opens up many potential applications that were not previously possible. We are now offering these particles for purchase here. Together with our separators this provides a packaged solution for scaling a magnetic nanoparticle application.

Researchers often synthesize nanoparticles themselves. While in house synthesis allows customization, it dramatically slows real world deployment, as every new iteration of particle requires development of separator that is tuned to that particle. A particle without a separator is not much use beyond the laboratory.

What we offer is a package solution. We offer low cost magnetic particles that clear rapidly and that are paired with magnetic separators that are tuned to these particle’s properties. Applications developed with our magnetic particle system in the lab have a direct path to rapid scale up to industrial processing rates. Another advantage to working with Manta is that unlike many other suppliers we can provide these particles from gram to ton quantities, which again means that applications developed in the lab can easily be scaled.

Nanoparticle researchers: Looking to make a difference beyond the lab?

Wastewater treatment companies: Looking for a partner for reduction of phosphate, heavy metals or other contaminants?